It’s hard to think of another film career that has begun with quite the same bang that Jessica Chastain’s has. After Meryl Streep transitioned from the stage to the big screen, it didn’t take long for the Academy Award nominations and leading roles to start stacking up. Audrey Hepburn’s star rose astoundingly quickly after her first Oscar-nominated performance in “Roman Holiday.” But neither Streep nor Hepburn can claim such a seemingly overnight ascent to the top in both the critical and the commercial realms.

Chastain first turned heads in 2008, playing the title character in “Jolene.” A small release that mostly played festivals, Chastain earned higher marks than the film itself. In 2011, the Chastain blitzkrieg began. “The Tree of Life,” “The Help,” “Take Shelter,” “The Debt,” “Coriolanus,” “Wilde Salome” and “Texas Killing Fields” assured her face was in every multiplex and her name was on everyone’s lips. A requisite Oscar nomination followed (for “The Help”), and again the next year (for “Zero Dark Thirty”). In 2012, starring roles in “Lawless” and “Zero Dark Thirty” catapulted Chastain beyond her label as a new, critically-beloved actress and into movie star territory. In the past two weeks, Chastain has held the number one spot at the domestic box office twice, and the top two positions simultaneously. The success of “Zero Dark Thirty” and “Mama” is crucially timed. Chastain is on everyone’s minds just as Oscar ballots are currently in voter’s hands. The hardworking actress could very well receive a trophy on stage at the Dolby Theatre next month. 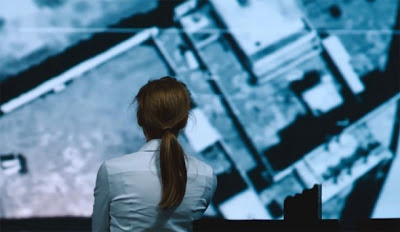 “Zero Dark Thirty” is Kathryn Bigelow’s much anticipated follow up to Best Picture winner, “The Hurt Locker.” While such a film was always going to be a hot ticket, the fact that it chronicles the man-hunt for Osama Bin Laden places it under a much higher level of scrutiny. Based on ‘first hand accounts’ of the ten year search, the film centers on Jessica Chastain as Maya, a fresh faced CIA agent, recruited out of high school, having ever only been tasked with finding Bin Laden.

Many of the film’s detractors like to pinpoint Maya’s lack of personal or social history as a weak point of the film. Chastain plays it cold and calculated, but manages to develop her character without much in the way of back story or subplot– a testament to her performance. We quietly witness her humanity on many occasions; as she first witnesses torture tactics, as she loses her closest friend and coworker, as her impatience builds following the inaction of the White House. Her slow decent into lonely obsession is both fascinating and painful to watch. Jason Clarke and Jennifer Ehle have two of the meatiest roles amidst the sprawling cast, offering Maya as much interpersonal contact as she is going to get. The film moves fast; at times playing like a documentary– mechanically delivering the facts to us, and occasionally playing like an action movie– making sure we see all explosions from all angles. Greig Fraser certainly puts forth some great photography, but fails to impress me as much as he did recently in “Killing Them Softly.”

For me, the two hours dedicated to the ten years of searching were a thousand percent more suspenseful than the last half-hour dedicated to the final raid. The raid is by no means a letdown, but Bigelow and her screenwriter/producing partner, Mark Boal, were smart to make the film more about the ‘how’ than the ‘what.’ 4.5 out of 5 stars. 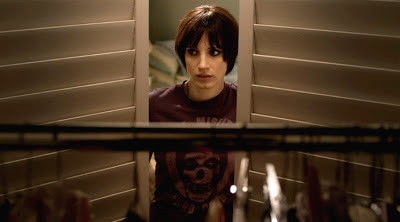 “Mama” is a film that I only bothered with due to the involvement of two names: executive producer Guillermo del Toro and star Jessica Chastain. “Mama” doesn’t offer us anything original, but might be a slight change of pace from much of today’s American horror fare. Blood and gore are almost completely absent from the film, minus a few stylized dream sequences. Shadow-play and fast moving banshees are the order of the day, making for some old fashioned fright. Unfortunately, some of the film’s technical aspects offer a mixed bag and the screenplay allows for more holes than can be found in the walls of this haunted house.

Wrapped up tightly in a cliche, Annabel doesn’t have time for kids yet– what, with playing bass in her rock band and her jet black hair and tattoo sleeve. But nothing has changed in terms of Chastain– you still can’t take your eyes off of her. Making her character feel real is her focus, and she succeeds. The “Zero Dark Thirty” naysayers will have you believe that Chastain puts forth a better performance in “Mama,” but it simply isn’t so. The material just doesn’t allow for that.

Without getting into all of the problems within the story itself, “Mama” looks pretty sharp. Good lighting and vivid digital photography displays each wisp of hair or flap of a moth’s wing with extra clarity. Schizophrenic coloring muddles the overall feel, going from steely grey to burnt orange to unfiltered and finally to an almost too blue midnight scheme. Each one has an appropriate look for this type of film, but the combination comes across as a bit heavy-handed. All petty criticism aside, “Mama” is still better than the majority of films coming out of the genre these days. Savor it while you can; I’m pretty sure Jessica Chastain will focus on more compelling projects from here on out. 2.5 out of 5 stars.