Trending
You are at:Home»News»Exclusive photos from “Dumb and Dumber To” Marietta set

The Farrelly Brothers’ “Dumb and Dumber To,” along with “The Hunger Games: Mockingjay – Part 1,” is setting Atlanta ablaze with all the excitement it is generating as it films all over the metro area. Already shooting in Atlanta, Grantville and Monroe; yesterday, the film moved to Marietta Square and continued filming there through today. Hundreds of fans and curious passers-by gathered at street corners to get a glimpse of Jim Carrey and Jeff Daniels as Lloyd and Harry.

While Laurie Holden and Kathleen Turner co-star and Jennifer Lawrence will make a cameo appearance, Carrey and Daniels were the film’s only big stars I caught today. However, it seems that comedic icon Steve Martin was in town and made a set visit. I can’t confirm that the man pictured below is actually Steve Martin (AJC Buzz reporter Jennifer Brett says it is, but an on-set PA said it wasn’t).

As evidenced by the Texas flags and a large banner above Church Street that welcomes visitors to a conference in El Paso, filmmakers are using the area to double as the west Texas city.

Filming continues in Metro Atlanta for the next several weeks. 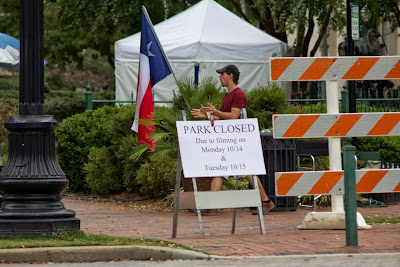 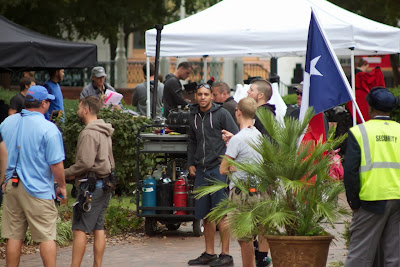