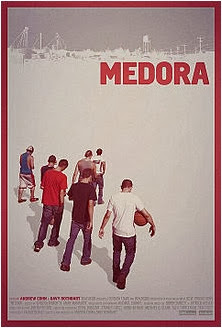 Medora, Indiana isn’t small-town America. It’s what’s left of it. Home to fewer than 500 people, Medora is so far under the radar that a Google search for its name yields a wealth of knowledge about Medora, North Dakota. Rather, it did until Andrew Cohn and Davy Rothbart came along. “Medora,” the duo’s debut as co-directors, follows the Medora High School Hornets’ 2010-2011 basketball season.  The result is an often painful, always poignant glimpse at the struggle for victory in a community that’s forgotten what victory feels like.

“Medora” begins in the team locker room post-defeat, where Coach Gilbert recounts the details of the boys’ unsurprising loss. According to the montage of previous years’ newspaper headlines, Medora High School had grown accustomed to winless season after winless season. Says one native, whose observation is corroborated by the team’s downtrodden expressions, “it’s hard to get rid of that losing mentality.” But Coach Gilbert, a title it seems no one else wants, is tasked with encouraging a team of perpetual underdogs to do exactly that.

Cohn and Rothbart, Marketing Manager and Creator, respectively, of FOUND magazine, accomplish with their film what they do with their publication—an unassuming premise disguises an insightful execution. To anyone who hasn’t yet seen it, “Medora” can be undersold as yet another high-school-sports-team-transformation story. The truth is that, by focusing on the children who are left to polish the pieces of an eroding middle class, “Medora” stands alone. Before the plants and factories shut down, Medora thrived. The featured parents, many of whom are single mothers, remember a time when they dreamt of success they would pass down to their children. Now, they all echo one mother when she says, “I don’t want him stuck like me…just trying to get by.”

Their sons comprise a team of friends preoccupied with off-the-court hardships. We meet Dylan, who’s never met his father. We meet Chaz, who joined the basketball team to “keep out of trouble” after his release from juvenile hall. And then there’s Rusty, who must choose between high school education and a self-supporting full-time job while his alcoholic mother completes rehabilitation. “Medora” delicately captures each adversity and creates wordless empathy; when they lose, it’s as if you have. Down to the film’s final buzzer, its tale is a compelling picture of what “your whole life ahead of you” looks like amidst the threat of inevitable failure. “Hopes and dreams…they can let you down,” says Chaz. But, as “Medora” triumphantly presents, they can surprise you, too.

“Medora,” the 2013 Official Selection of SXSW, Full Frame Documentary Festival and the Sarasota Film Festival, offers a free soundtrack sampler, merchandise, and video game at medorafilm.com. The film is currently available for download on iTunes.