Trending
You are at:Home»News»2014 Georgia Independent Film Survey Results
Editor’s Note: Credit for this exceptional piece must go to our partner Charles Judson at CinemATL. If anyone has their finger on the pulse of Georgia’s independent film scene, it’s this guy. We look forward to continuing and further developing our partnership with CinemATL in the future. -CM

The results of CinemATL and Reel Georgia’s first survey of the Georgia Film Scene are in. All submitted survey responses can be found at the end of this post.

We asked 9 questions:
There will be those who will agree with the picture the answers create of independent film in Georgia. With Georgia’s film boom well into it’s 6th year, some will vehemently disagree. Whatever side you may fall on, this should be a catalyst to discussion. We’ll be following up with a more detailed reactions from our own contributors and from the community in a week or so.
A few things to note as we dive in.
There are 48 total responses. We posted, tweeted and emailed as often as we could to get the word out.
Our biggest push were two boosted Facebook posts we created. Through keywords and audience, we aimed those posts specifically at the film community, targeting Atlanta up to a radius of 50 miles. That’s 7,800 square miles that stretches just shy of Athens.
Why target Atlanta and not the entire state? Research shows the concentration of online activity by the film community is in this area. Going further out would just dilute our reach.
As a result, our first boosted post reached 11,288 potential respondents. The second reached 5,360. Including email and our additional social media channels, we hit about 30,000 people total (how much overlap we don’t know).
We’re including this information to highlight that we wanted to give as many as possible a chance to answer.
THE BREAK DOWN
We asked how much respect did indie films get from industry in the community, how much confidence in Georgia’s film future respondents had, and how would they grade their personal experience working on independent films in Georgia. The lowest rating was a 1, the highest possible was a 5. Averaging the answers, the gauges below are the end product.
On the low end is Respect at 2.56. It’s in the red, because at 2.56, it’s just .07 (point zero seven, if it’s hard to see) shy of being a solid D. There aren’t many surveys like this one, so it’s difficult to know if that’s on par with other communities. This number is strongly reflected in the answers to the defining what is an independent film question we posed, as well as in the negatives of independent filmmaking we asked. One answer in particular sums up the overall consensus:
[Independent Film] is a stigmatic term that brings to mind poorly made and managed projects that will never have a vital distribution pipeline. Netflix fodder. Indicative of a filmmaker’s allegiance to their own point of view and disconnection from what an audience wants.

Confidence and Experience came in solid C’s, at 3.33 and 3.46 respectively. Experience just missed B by .04. Its average rollercoastered from B to C and back for the first three days the survey was open. At that point, it dropped to a C and never bounced back up.
AWARENESS AND FESTIVALS
How aware the rest of the country is of Georgia’s independent film scene goes hand in hand with Georgia’s presence at major film festivals like Sundance and SXSW. Almost 60% think the rest of the nation either doesn’t know that Georgia has an independent film scene, or that even if they do, they couldn’t define it. 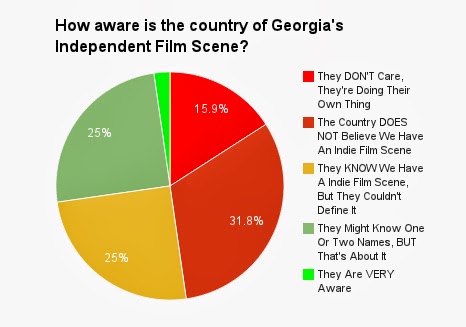 That so many think Georgia’s image outside the state is severely lacking, makes the resulting D (2.35) for representation at notable film festivals unsurprising. It’s at festivals like Sundance that the film community most takes notice of upcoming talent, and where that talent is coming from.

At first glance, it may appear that with 60% giving this area C, the D doesn’t seem right. Only 11% gave film festival presence a B or higher. They couldn’t outweigh the 31 percent that graded this area with D’s and F’s. 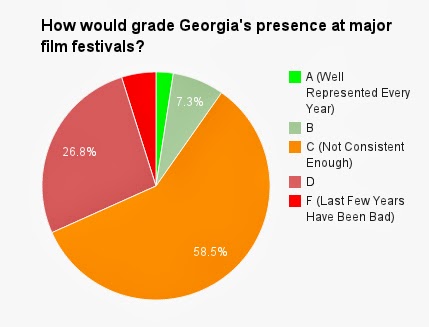 OVERALL
So where does this land us? When we asked for the overall grade of the indie film scene, the result was a C. Tellingly though, it’s a 2.9 average that falls almost dead between a B and D.  What is the correlation between this 2.9 and the stronger 3.56 for personal experience? The obvious answer is that as a community, independent film is trending strong. In simplest terms, we kinda like and dig each other. On the flipside, that 2.9 reflects that the community may not believe that camaraderie is translating. The ability to make a film is embodied in the final product.  While the quality of that product isn’t entirely benefiting from the cohesiveness of the community. 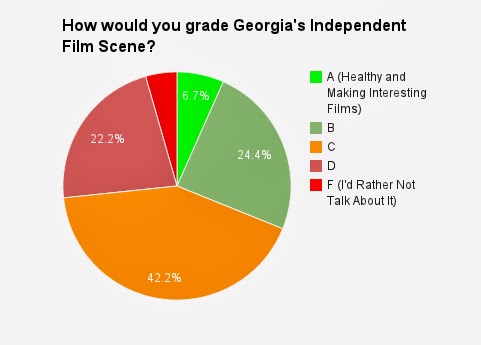 THE QUESTIONS
We’re going to leave it up to you readers to delve into the answers below. We will be following up with insights and responses from the community, and we’d rather not dig too deep.
What we do want to point out is how elusive consensus can be. The numbers and data we’re offering are just a start to more conversations and introspection, and not at all definitive. Generating a few word clouds illustrates this.
Using the first question, we generated these word clouds from all the answers provided. When the frequency is 1, meaning as long as a word showed up once it had a shot at being included in the cloud, we get about 40 words.  It was 45 before we removed irrelevant words like “basically.”
As we up the frequency from a word having to show up at least 5 times to a minimum of 10, the list drastically shrinks.
It’s notable that when asked to define what is an independent film, the word “studio” is only 7 shy of film. Many of the answers to what is an independent film were formed in the negative. Respondents defined indie film by what they perceived it not to be. In the first block you’ll see that the words creative, artistic, stories and passionate only received 3 mentions each. The word Budget appeared 4 times as often, with 12.
One could read this as an indictment, concluding that the general perception of independent film filmmakers are feeling is on par with the perception of Georgia’s independent scene itself. This could also be interpreted as a sign that while many of us work in the same community, we haven’t developed a shared language and vision of what that community is. The 3.56 shows that our hopes for the community may align, while the 2.9, when paired with the 2.56 for respect, shows that our collective aspirations may not.
There is more discussion needed. This should be the start of dialogue, not the end.
Georgia Independent Film Survey Responses
Share. Twitter Facebook Google+ Pinterest LinkedIn Tumblr Email