“Meru,” directed by Jimmy Chin and E. Chain Vasarhelyi, is the harrowing true story of three climbers who dare venture upon this world’s steepest and most challenging of climbs. Conrad Anker (a climber known for his relentlessness, but made famous by his discovery of the remains of George Mallory’s body), Jimmy Chin (National Geographic photographer, world-class climber, and the film’s director), and Renan Ozturk (talented climbing up-and-comer) are willing to test the limits of their potentials, they’re willing to push themselves to do what, literally and truly, no man has ever done before. 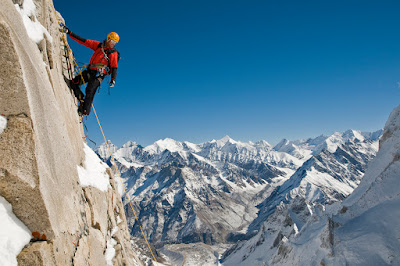 Anker, Chin, and Ozturk want to climb Shark’s Fin, a steep and unforgiving 1,500 foot wall at the very tip of the Meru Peak in the Himalayas (elevation: 21,850 feet). That’s not as tall as Mount Everest, which rests at a very uncomfortable 29,029 feet, but Meru is considered far more challenging simply because of Shark’s Fin. The film is as treacherous as the climb itself—and just as satisfying. Anker, Chin, and Ozturk attempt the climb twice; the film covers the 2008 attempt, the 2011 attempt, and most important things that occupy the years between. Writer Jon Krakauer (“Into the Wild,” “Into Thin Air”) offers thoughtful insight and essential context for the viewer; he acts as a lens through which even the most inexperienced climber can fully occupy the story. “Meru” is not always a fun story, and it’s certainly not easy, but I’ll argue that it’s worth it. The high-altitude imagery is absolutely breathtaking, and the stage is so gorgeous that you can’t help but admire, in a seriously jaw-dropping way, the furious beauty of this world. It’s simply stunning.

“Meru” is a film that’s always reflecting, always tempting the viewer into picking a side: safety or recklessness? Because that’s what it is. That’s the choice, and everything is on the line. Are they willing to risk death to be great? It is, without a doubt, a film that aims to fortify the strength of the human spirit; it aims to motivate and encourage and inspire. And it is inspiring, it really is—until it’s not. Until you begin to question whether there’s much difference between being courageous and just plain reckless. Upon watching “Meru” you discover there isn’t much that separates the insane from the brave. But I suppose in the end, that’s not what matters.